1. The Dark Side of CAR-T Therapy: CRS

The Dark Side of CAR-T Therapy: CRS

But what does CRS mean?

CRS stands for Cytokine Release Syndrome. Cytokine Release Syndrome is a clinical syndrome resulting from generalized immune activation correlating with marked elevations of serum inflammatory markers and cytokines. The first clinical signs of CRS are fevers, myalgias, and fatigue. But starting from fever with or without constitutional symptoms (CRS grade #1), symptoms can rapidly evolve to hypoxia requiring O2 (grade #3) and finally death (grade #5).

But is the probability of a CRS event really alarming?

The risk of CRS is influenced by factors related to the type of therapy, underlying disease, and characteristics of the patient. Treatment with most conventional monoclonal antibodies carries a relatively low risk of CRS, whereas CAR-T therapies carry a significantly higher risk of CRS incidence.

With regard to recently approved CAR-T therapies, Yescarta was studied in 107 adults with large B cell lymphoma and ninety-four percent of treated patients developed CRS and 12% developed grade ≥3 CRS. Kymriah was tested in 68 paediatric and young adult patients with relapsed/refractory ALL and seventy-nine percent developed CRS with 49% developing grade ≥3 CRS!

But what can we do when CRS occurs?

Corticosteroids may be necessary in some cases, but in high doses have proven to have a detrimental effect on CARTs.

Since the initial observation that tocilizumab, an antibody against the IL-6 receptor, rapidly reversed severe CRS, the drug remains at the forefront of CRS treatment.

For the future, many CARTs in development incorporate suicide targets as methods to mitigate toxicity. Another approach is manufacturing CARTs that can be regulated without actually killing them, for example requiring infusion of an additional agent for activation.

But diagnosis is better than treatment.

Early prediction is necessary as the side effects appear rapidly - within 1 to 2 weeks - following CAR-T infusion. The elevation of the signature set of 24 different cytokines is then an interesting and crucial measure to monitor in patients.

The main cytokines implicated in the pathogenesis of CRS include effector cytokines released from activated T cells, but also cytokines mainly secreted by monocytes and macrophages. IFN-γ and sgp130 levels, for example, rise early and their elevation is different for severe versus non-severe CRS.

In order to effectively monitor the risk linked to immunotherapy, Diaclone has developed a large panel of standard recombinant cytokines and monoclonal antibodies targeting specific cytokines engaged in Cytokine Release Syndrome, as well as ELISA and DIAplex kits. As a first evaluation test, and for 7 of the targeted set of cytokines, Diaclone DIAplex is a particularly useful tool for providing a rapid response and with a reduced sample volume requirement starting from only a few µl.

They are sometimes qualified as antagonist, sometimes as agonist. Sometimes named inductive, sometimes repressive, sometimes blocking, or sometimes neutralizing. But they are always called antibodies. Have you ever guessed what it was about? Yes, that’s them, the biologically active antibodies! 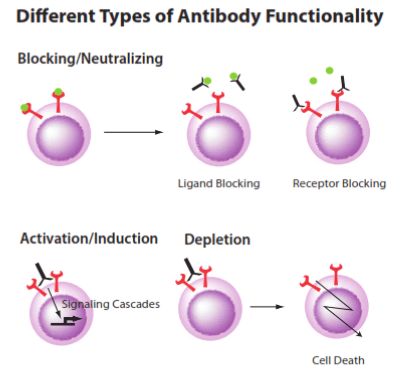 Depending on the nature of the antigen, a specific antibody can demonstrate different biological functions:

- if the target is a cell surface marker for instance, the desired effect of the mAb may involve  proliferation (induction/activation effect through a signaling cascade ), inhibition, cell maturation or even the killing of the target cell. Cell depletion will then occur through the  recruitment of immune mediators with the Fc portion of the mAb to trigger antibody-dependent cellular cytotoxicity (ADCC), antibody-mediated phagocytosis cytotoxicity (ADCP) or complement-dependent cytotoxicity (CDC).

- if the target is a soluble molecule such as plasma protein (TNF, VEGF…) or a drug, the binding may  trigger a blocking effect. When bound to the mAb, these drugs are not able to interact with their  normal targets anymore. Of course, blocking effect can also occur via the cell surface receptor like the well-known immune checkpoint inhibitors (targeting CTLA-4, LAG3, PD1 and PDL1).

- If the target is an infectious organism, the desired function of antibodies may be  neutralization of the foreign host, so disabling the virus, bacteria or other. In fact, most licensed vaccines teach the body how to make neutralizing antibodies.

(a) Recombinant human IL-6 stimulates proliferation in XG1 cell line in a dose-dependent manner. The ED50 is typically 30-40 pg/mL.

Unfortunately, many difficulties can appear during the process of raising biologically functional antibodies. We can name:

- the presence of cryptic binding domains,

- the very high binding affinity of the target for its receptor, which makes the generation of inhibitory antibodies extremely challenging,

- the very narrow window for neutralizing antibodies to act before the establishment of a virus  infection and its genome integration into the cell host.

Either from a classical hybridoma approach or by phage display technique, DIACLONE has over the years learned to tackle all these obstacles to offer you the best possible antibody references. Thanks to its bioassay platform, all our references are highly validated via proliferation, cytotoxicity, neutralization or various cell functionality tests.

Want to know more about these unique antibody references?

Or you desire to validate your antibodies via our bioassays?